BiXBiT releases new firmware for the S17, S17 Pro Bitmain Antminer series with overclocking potential of up to 60%

The partnership team of BiXBiT developers introduced the firmware compatible with new S17, S17 Pro models of Bitmain Antminers. Stable operation without failures along with favorable terms of use is what distinguishes it from analogues.

The truth is that the development itself wouldn’t even be possible without detecting the vulnerability in the first batch of S17 ASIC models. Basically, it allowed to unlock Port 22 (SSH), which Bitmain diligently locks in the latest versions of the original firmware. As such, only firmwares with create_log_backup.cgi vulnerability can take this advantage of the BiXBiT firmware [example: Antminer-S17-user-MD-201905241706-sig.tar.gz].

You do not need to purchase high-capacity power supplies to get started, as all thresholds can be achieved with a standard built-in power supply. Currently, a 60% overclocking has been reached over the S17 (53-56 Th/s) and S17 Pro (50-53 Th/s) stock parameters, bringing their overall performance to 84 Th/s for now. 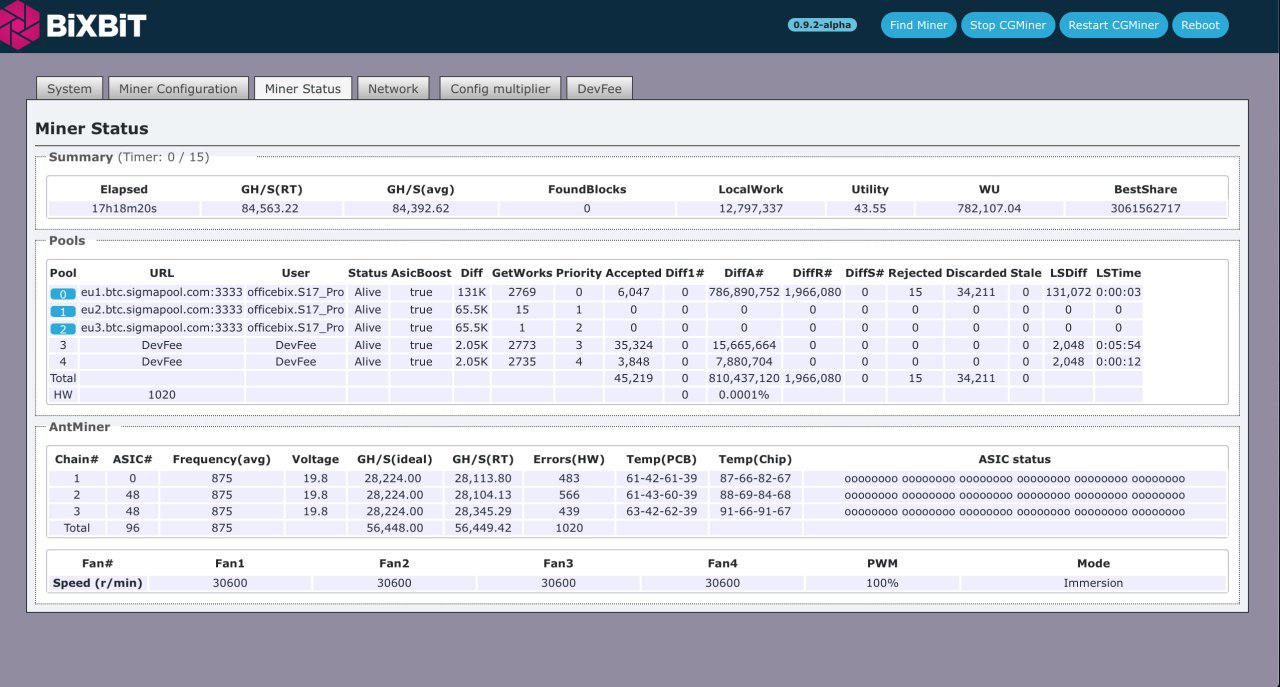 In this version of firmware we use a frequency of 875 Hz at a voltage of 19.8 V, but once the autotune will be released, the performance will increase even more, so it it will be possible to ensure steady overclocking of up to 90 Th/s.

The firmware allows to disable fans without using any kind of kludges and makes it equally operable both for air-cooled ASICs and when using immersion cooling with equipment fully submerged into dielectric coolant.

The developer’s reward (Devfee) in this firmware is only 3%.

For reference, even the latest version of Bitmain Antminer S17+ produces only 73 Th/s. That is, ASICs and Chinese-made chips particularly have significant overclocking potential, which can be achieved using hardware solutions, especially in such conditions as provided by immersion cooling. Thus, the possibility of saving and purchasing a cheaper ASIC model emerges (a difference of $500-600) while still hitting top performance.