Immersion Liquid. Choosing The Right One For Mining

Over the past few years, dozens of compositions have appeared in the world under the label "the best liquid for immersion cooling". But behind the loud names there are well-known variations: synthetic polyalphaolefin oils, organosilicon oils, fluoro ketones and others. So what is the best liquid for immersion cooling of computing equipment? Let's find out.

Novec fluid may be the best, but it's expensive

Novec is a product of the American industrial chemicals corporation 3M. It gave the world transparent duct tape, magnetic audio tapes and Fluorinert, a fluorine-containing refrigerant. The latter was regularly criticized for its ozone-depleting substances and indirect effects on global warming, so in 1996 it was replaced by Novec, devoid of the shortcomings of its predecessor.

Fluorine-Novec is truly unique in many ways. It is transparent, nonflammable (used for extinguishing fires in electronics), odorless, has various boiling points, excellent dielectric properties, and is compatible with most components of computing equipment. In recent years, 3M has even managed to create an image of Novec as a "specially modified fluid for miners," which has only increased its credibility, combined with the company's 120-year history. 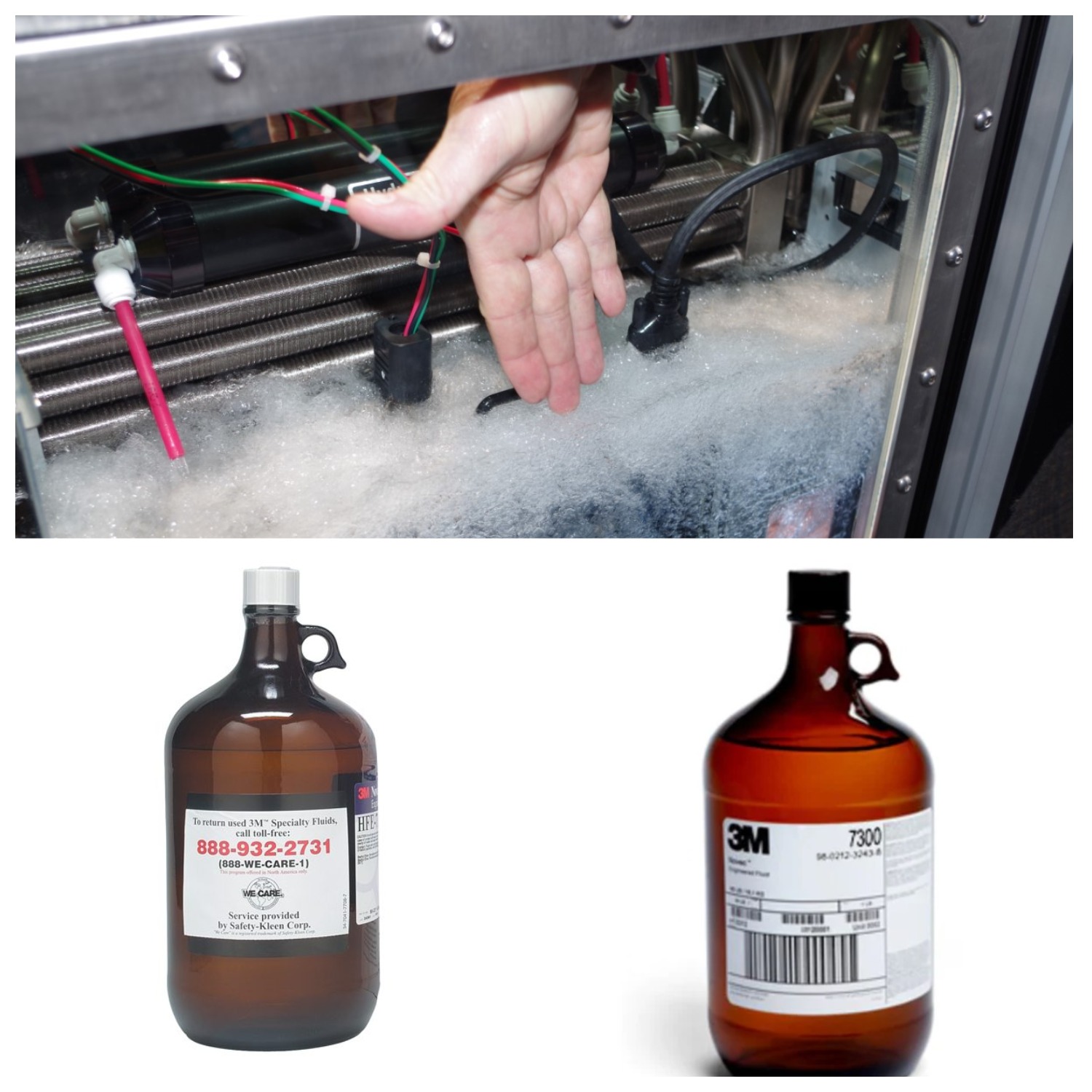 It should be said that Novec has proven itself in two-phase and single-phase cooling systems for mining equipment. Most often, the 7000, 7100 and 7200 compositions are used for the two-phase system. Remarkably, in the two-phase cooling system, only fluorocarbon fluids can be used, filling it with oil makes no sense. The above-mentioned compositions do not have the highest boiling point, which correlates with the operating temperature of the elements and effective heat transfer. Due to the natural evaporation, condensation and cooling of the fluid, the system does not need internal circuit pumps, complex and expensive heat exchanger and some other elements. You can read more about how Novec liquid immersion cooling systems work in this article: Novec and Coolant liquids comparison - why we stick to our own formula.

However, the two-phase cooling system based on Novec has a number of drawbacks that make its use in home mining practically impossible, and in industrial mining it is associated with disproportionately high costs for organizing such a system. First, the liquid is very expensive. The price starts at an average of $130 per liter! Secondly, to use Novec you need an absolutely leak-proof tank with a system of increasing pressure compensation. Finally, the submerged equipment also requires rework, which makes using a two-phase system much more expensive. And the cost of the condenser sometimes exceeds the cost of any heat exchanger.

Not better is the situation when creating a single-phase cooling system based on Novec 7300, 7500 or 7700. In this case, the farm design is of course simplified and any equipment can be immersed in it, but the high volatility still requires making the tank as airtight as possible. With prolonged use, Novec is prone to boil off, which means having to constantly buy extra. In addition, there are too many variables to consider, and it is possible that the composition will eventually corrode some elements of the computing equipment.

Silicone oil - an invention not for mining

Some Russian companies-manufacturers of immersion cooling systems actively advertise their "miracle liquid". Sometimes it is called by different beautiful names, but most often it is sold under the more familiar brand PMS-50 or similar (PMS-5, 10, 20, 100).

Polymethylsiloxane, as the main representative of silicone oils, indeed has some special properties. For example, it does not support combustion up to a certain point, evaporates very slowly, is resistant to oxidation, is not hygroscopic (i.e. does not absorb moisture from the air), does not react with components of submersible equipment, is biologically safe and etc. 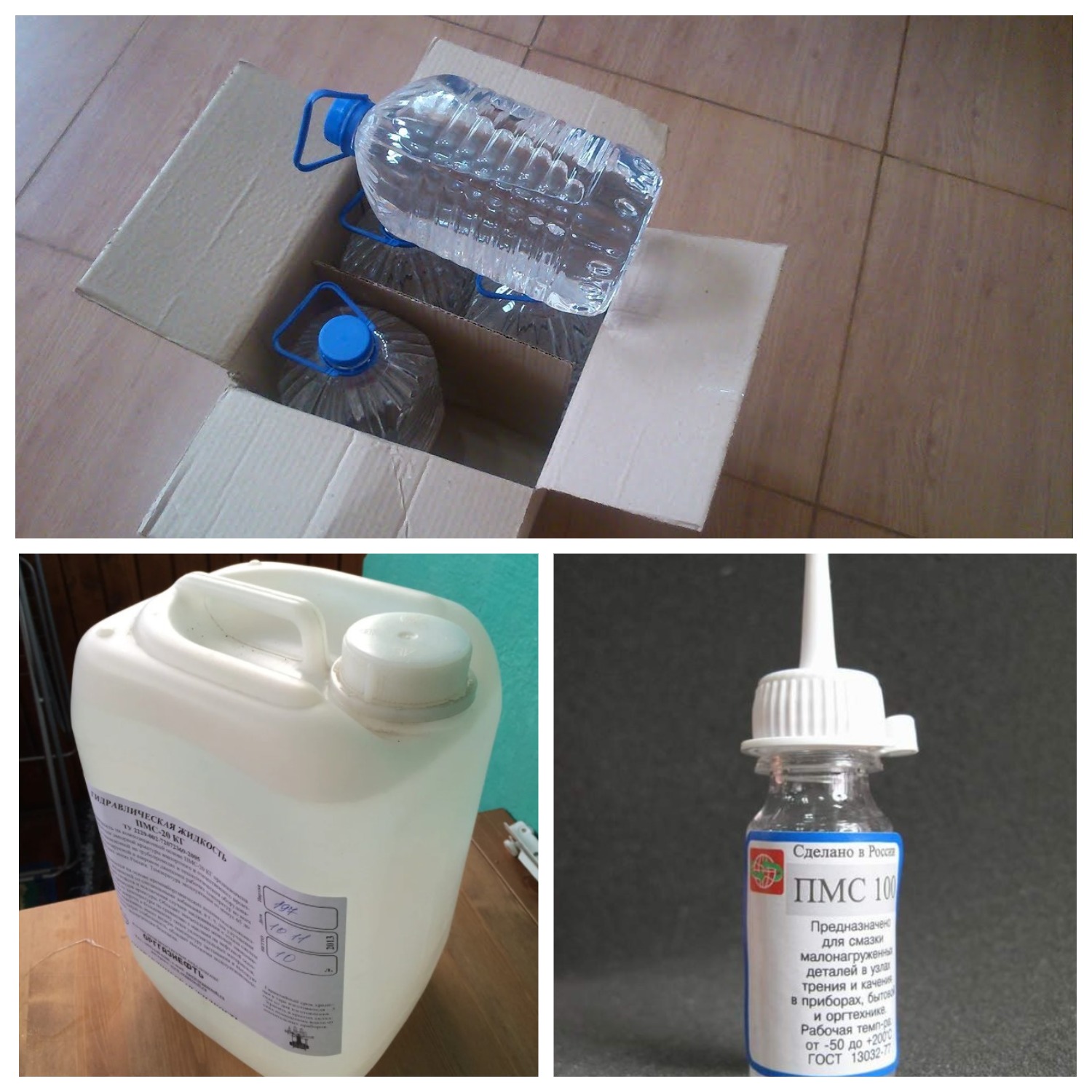 However, the very first point raises questions. Local ignition of a liquid in a tank of, say, 60 liters is not dangerous. But when the temperature reaches the flash point (which is at 200-300°C here), it will ignite similar to any oil. It is also worth noting that even though it was developed for cooling electronic equipment such as transformers, manufacturers have never recommended silicone oil for immersion cooling of circuit boards, chips and other multi-layer components.

The reason is that such liquids have a low density and can easily penetrate gaps and empty spaces between printed circuit boards. Fluorocarbons, for example, have a density at least twice as high, which prevents them from deforming the boards so easily. You can talk about varying degrees of purification of oils and their high inertness, but problems with the textolite sooner or later will start anyway. And such liquids cost an average of $10-12 per liter.

Thus, polymethylsiloxane and its analogues are a good temporary solution for immersion cooling of a small number of miners, but the significant price makes one doubt their effectiveness for industrial mining.

Synthetic oil - in defiance of physics

This type of base oil can also be found on the market under a bunch of different cryptic acronyms. The appearance of the liquid is quite attractive - clear, colorless, odorless, and has a good flash point of 170-200°C. It also has a low viscosity and a low pour point (-60-70°C). The oil is chemically passive and resistant to oxidation (if the container is closed most of the time). The normal retail price is less than $1/liter, but as an immersion liquid it can be sold for $2/liter or more.

Moreover, the use of synthetic oils, regardless of their name, requires the user to be very attentive at the stage of purchase. Synthetics need additives, the presence of which is very difficult to determine by eye. In addition, it has very controversial thermophysical properties. The delta between the temperature of the upper layer of the liquid and the chips may reach 40-45°C. That is, the chip can really "boil" at 100°C, while the surface layer of the coolant will show quite workable 60°C. Since it is the top layer that is removed in most immersion systems, using a fluid with this temperature for, say, smart heat utilization will be problematic. 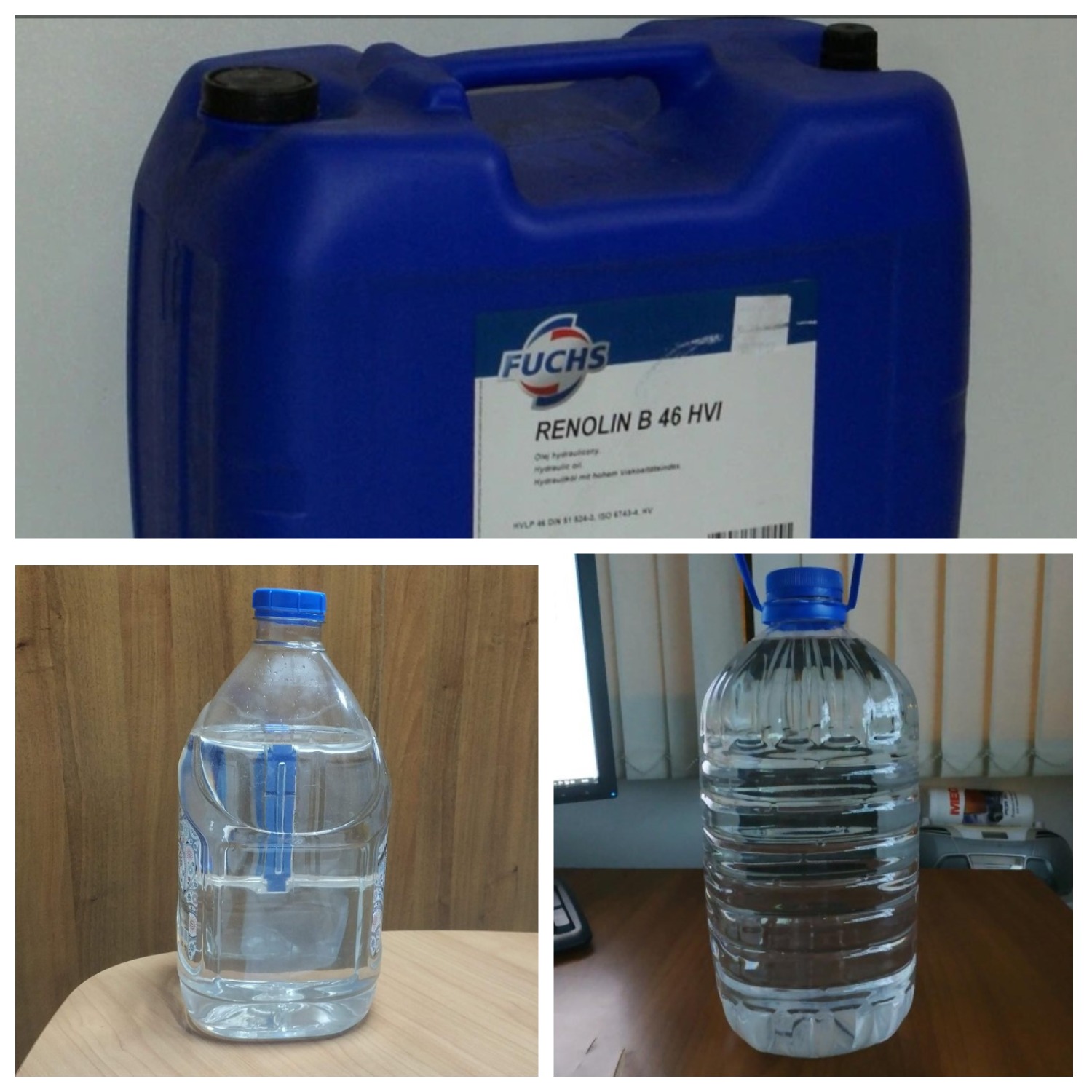 Therefore, synthetic oils are most often recommended for small home farms, assembled on their own and with no intention of taking advantage of immersion cooling other than eliminating noise and dust. The situation is similar with oils like HVI, which are basic isoparaffin or semi-synthetic oils. By the way, they have a rather low flash point (135-170°C). Base oils of this type are used in motor, lubricating and hydraulic oils. Consequently, their effects on electronic equipment in the long term have not yet been studied, and there is great doubt that they are neutral.

There is also no reliable data on the effects of such oil on humans through prolonged contact. It darkens over time, oxidizes quickly even with additives, and has a limited lifespan. Again, though, its price is really one of the lowest, and is limited only by the greed of the seller.

For those who want to get the hang of immersion-cooled mining cheaply and quickly, we can indeed recommend using transformer oil. However, by using it, you run the risk of missing the profitability and even the break-even point of the project. The fact is that these types of oil are chemically active, that is, they react aggressively with the components of computer equipment. 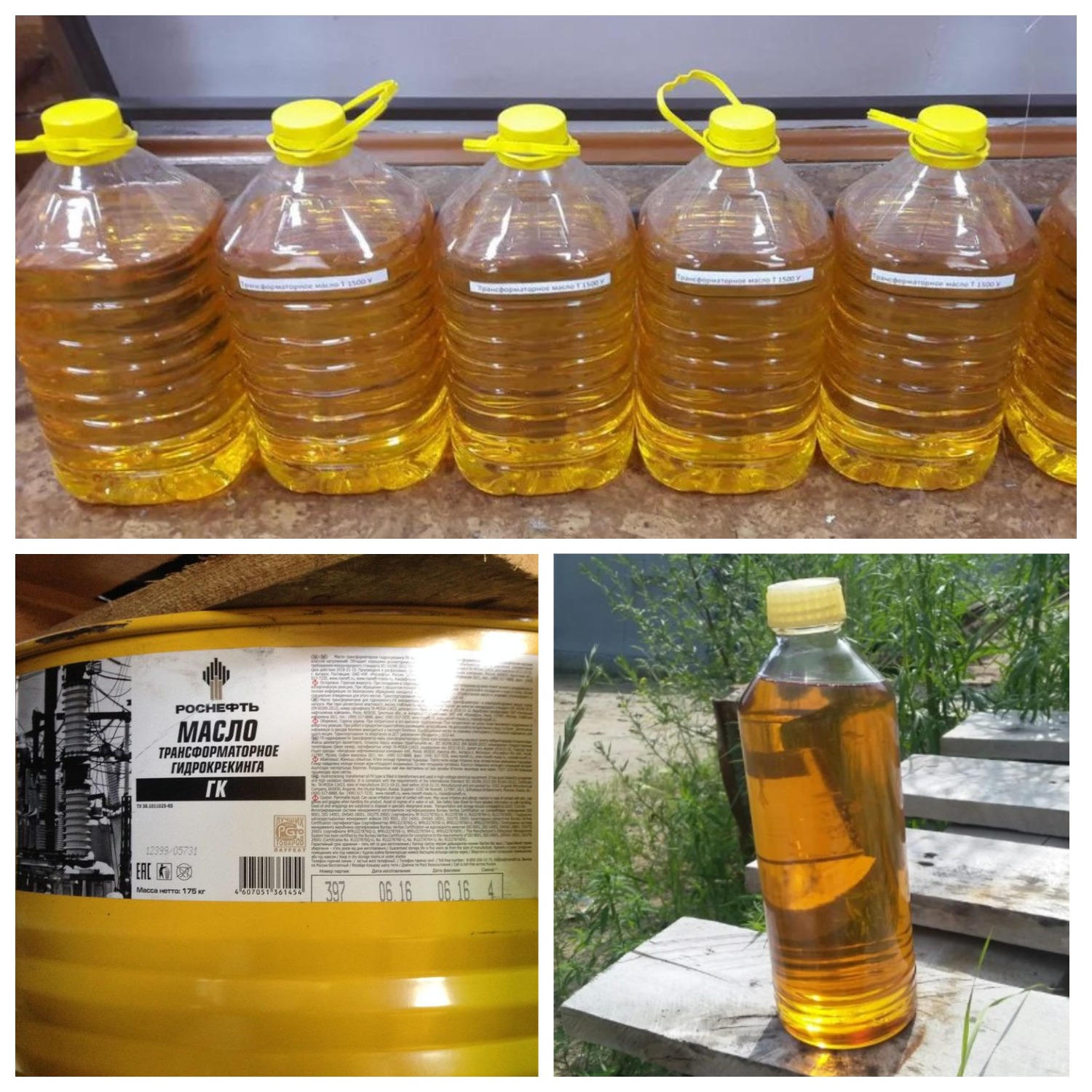 Also, transformer and motor oil actively absorb moisture from the air, losing its dielectric properties. And, finally, most importantly - such oil cannot be nicely drunk from a spoon for a YouTube video. Allergies, poisoning and severe consequences for the body are guaranteed. Vapors of poorly purified petroleum products (and transformer oil is just such a product) cannot be inhaled for a long time. Fatigue, dizziness, headache and nausea are guaranteed if you stay in the oil mist zone for a long time.

That said, like any mineral oil, transformer and motor oil has some advantages. Yes, it doesn't conduct current and costs obscenely cheap ($1-2/liter), but that, perhaps, is where all the advantages of this kind of oil end. Although this is not a verdict on the whole vast group of mineral oils for cooling mining farms, which we will talk about below.

Most finished mineral oils, take Vaseline oil for example, are absolutely safe for living organisms and the environment. That is why they are used in pharmacology, beauty industry and other spheres. Although the basis is still the same petroleum product, only obtained by a very high degree of purification and, if necessary, additives. It is relatively inexpensive and has thermophysical properties that are optimally suited for cooling electronics.

In fact, it is the white mineral oil for mining rig that has become the "golden mean" among analogues. One of the main advantages is that it is suitable for both home farms and large projects. In fact, you can dip three of your ASICs in purified, deodorized sunflower oil and proudly claim to have built an immersion-cooled farm. But organizing a 1 MW farm on this basis will not work for a number of objective reasons, including those related to the properties of the coolant-dielectric. 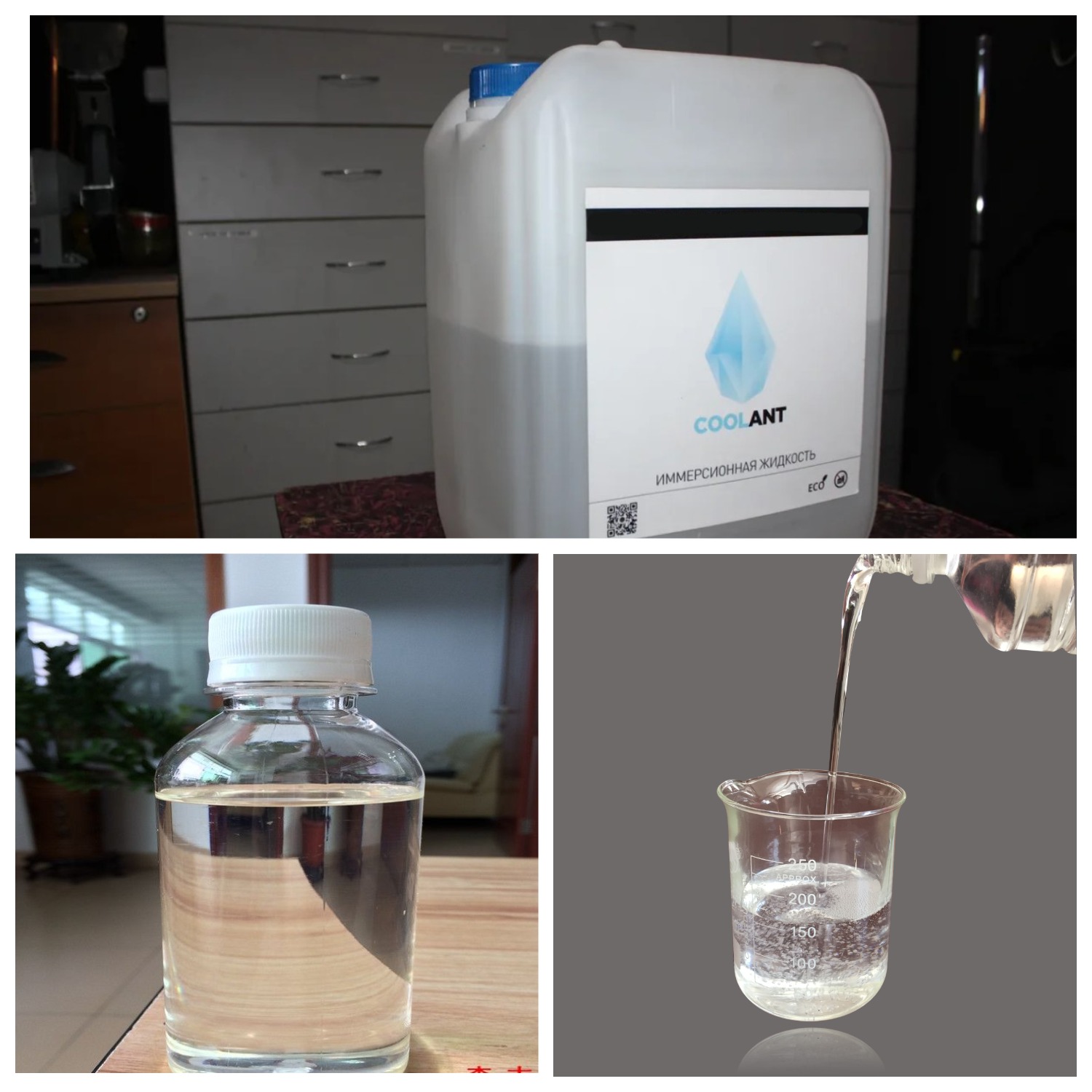 Mineral oil also has disadvantages. Yes, theoretically, over time it too will oxidize, become saturated with moisture and can be ignited (but only when the entire volume of oil, which is 160-180 liters, is heated to its flash point). Usually by this time the chips and devices themselves are already melted and frozen before ignition occurs. In quality immersion cooling systems, this is compensated by the use of expensive and proven components, chosen based on calculations of well-designed heat dissipation and redistribution systems, as well as by the use of high-purity oils.

Mineral oils of high purity have a suitable flash point (within 220°C), viscosity, minimum dielectric loss tangent. Before immersion, the mining equipment is pretreated and the devices themselves are placed in partially hermetically sealed containers. You can check the optimal characteristics of a high-quality liquid based on mineral oils with a high degree of purification for mining on the example of BiXBiT Coolant. The company emphasizes that the disadvantages of this type of oil are compensated by a technically competent solution based on immersion cooling, which includes the selection of the correct pumps, heat exchangers, and other equipment.

Mineral oils are virtually the only rational solution for single-phase cooling systems with useful heat recovery. Output temperatures are higher than in two-phase systems, which allows for more efficient water heating. And it is also several times cheaper than building a similar system on two-phase cooling, which BiXBiT can also do at the request of the customer. But you do remember the cost per liter of Novec, don't you? And BiXBiT Coolant will only cost $5-7/liter. Savings start here, as they say.

So, the question of whether or not to use one cooler or another depends on the objectives you have in mind. If the goal is to submerge a pair of ASICs in a homemade tank, it can always be cheap, unreliable, and not durable. If you want to use your devices for 15 years, and you don't need heat recuperation, but you have a lot of money, feel free to choose fluorocarbon refrigerants. But if your principle is a rational approach to business, the intention to scale capacity and use quality appliances for adequate money, then choose a complex solution from BiXBiT.