Over the last years, a dozens of different liquid compositions have appeared, which are positioned as liquids for immersion cooling. This is mainly refers to varieties of mineral oils, PAOM, silicone oils (PMS, PDMS, PES siloxanes) or fluoroketone. So why have we decided to conduct a bunch of experiments and choose an optimal and cheap composition considering that there are plenty of solutions out there?

Originally, mineral oils were used to cool the electric transformers. In the 50th years, a company named 3m was first to produce a fluorine-containing coolant for military avionics. He was called Fluorinert. In 1996, a new type of liquid under the brand name Novec appeared, which didn’t contain ozone-depleting substances.

The first generation liquid belonged to perfluorocarbons. Its properties:

The main disadvantage of Fluorinert was that the liquid evaporation remained in the atmosphere for a long period of time and indirectly contributed to the global warming. Therefore, they were used in installations where it was possible to ensure tightness and minimization of liquid emissions into the environment. Special attention was given to ensure liquid does not get on the skin and eyes. As a result of many years of its usage in Cray-2 supercomputers, it turned out that it splitted and extricated a very toxic perfluoroisobutane. During the long-term operation in data-centers, a variety of problems occurred with power supply units, wires, capacitors, etc. 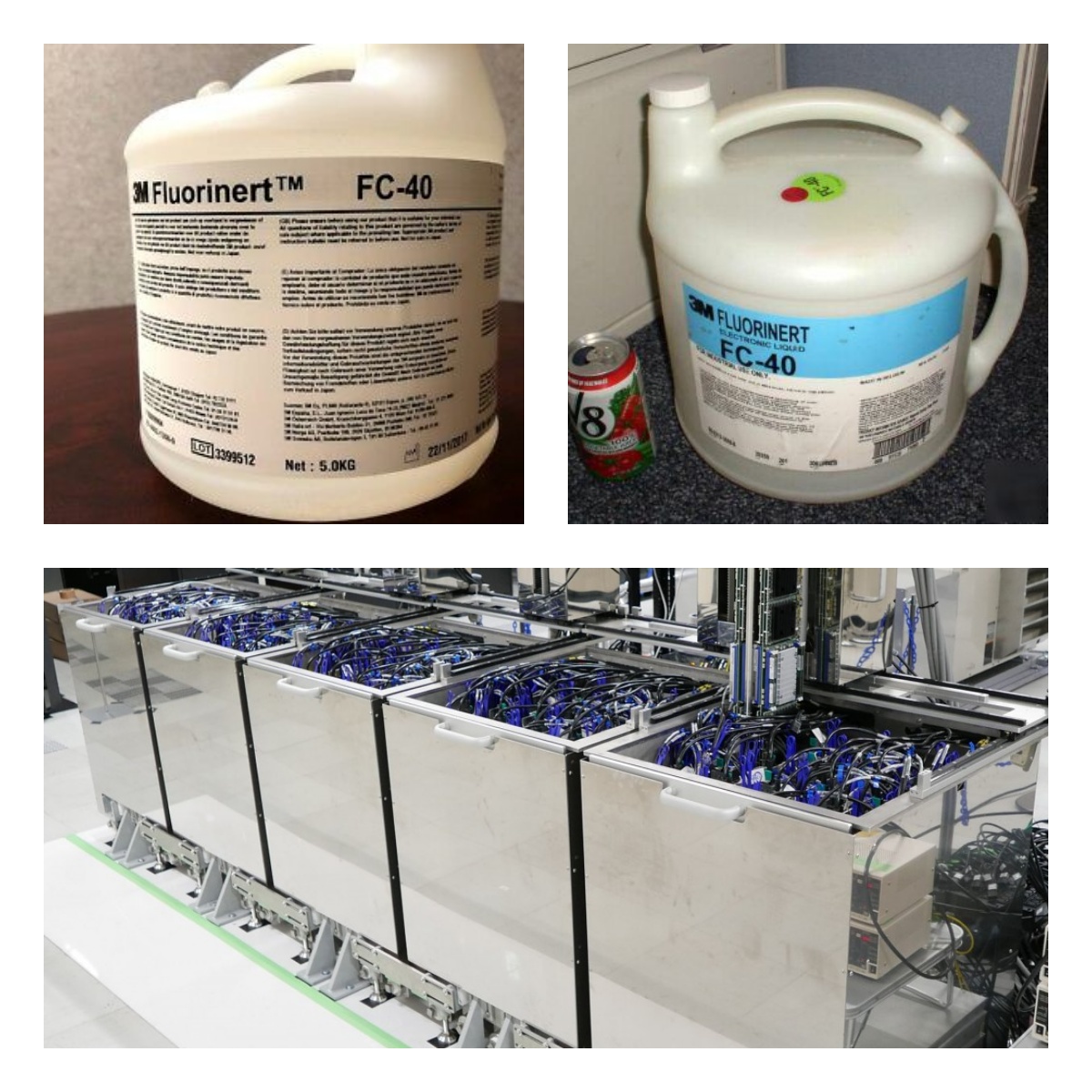 Novec fluids are mostly popular in the West. First of all, the brand prove itself as safe extinguishing agent to suppress the ignition of electronics. Secondly, 3M positioned their liquid as specially refined for mining. Thirdly, the USA and Western Europe miners are ready to invest in mining with a long-term outlook. And what is important, they are ready to invest hefty funds in the cooling system. Across the CIS, on the other hand, immersion cooling is more associated with experiments and individual projects, supposedly to be cheap and as safe as Novec. But there is no such thing.

With the use of Novec, it became possible to create two-phase immersion cooling systems (2 PIC) with half-open containers.

Two-phase cooling system based on Novec

In a two-phase cooling system, the board or other equipment is placed in a holding capacity. As for dielectric liquid, for example, Novec 7100 with a boiling point of 61 degrees Celsius can be used. Due to generated heat by the equipment during operating process, the liquid heats up, boils and evaporates. Novec removes heat from the hottest elements and transfers it to the condensers in which the cooling fluid (water) circulates. It is an intermediate coolant, through which the heat released during condensation of the refrigerant is discharged into the environment. 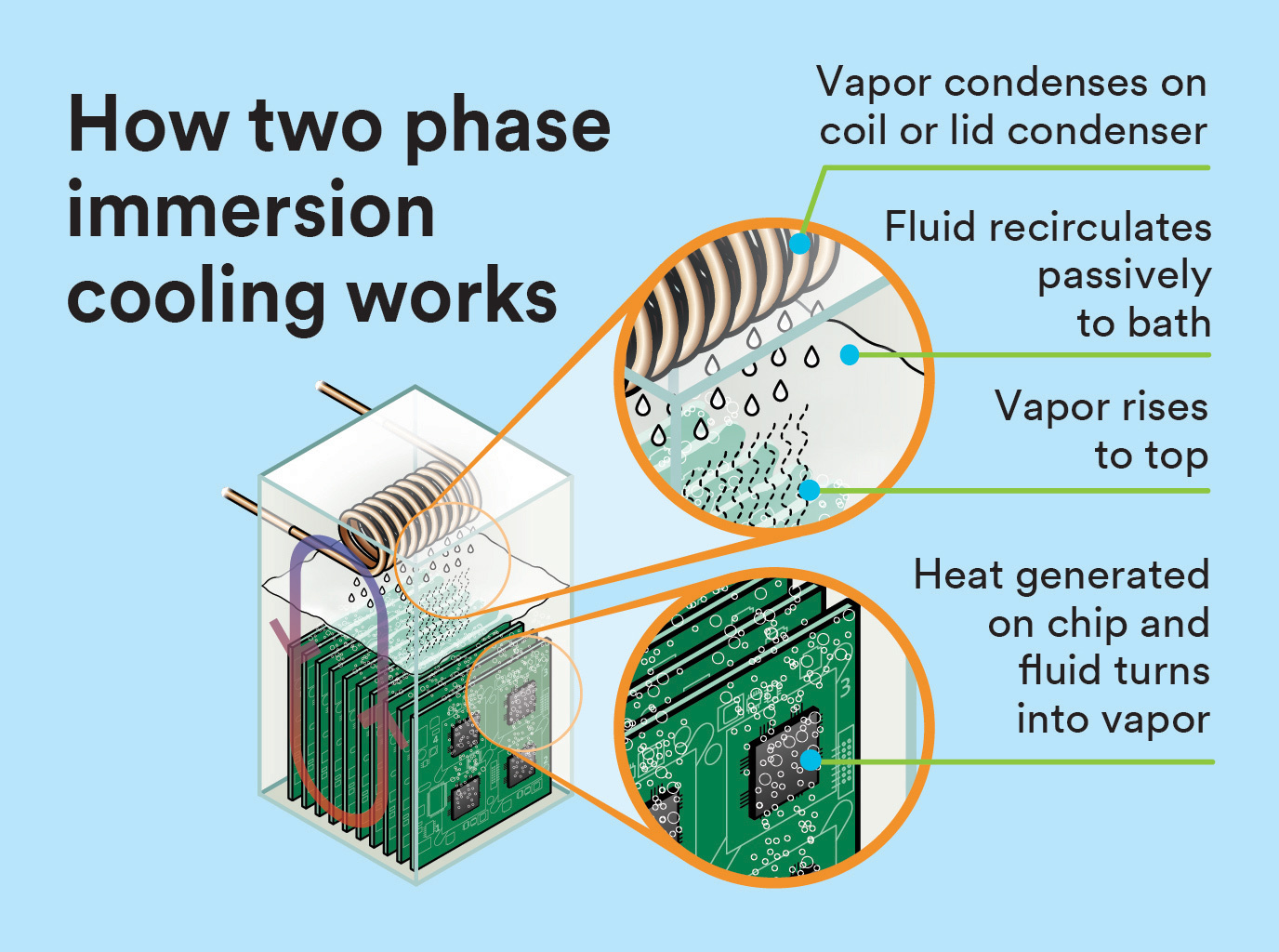 To evaporate 1g of Novec, 120 joules of energy are needed. A 200w video card evaporates about 2g of liquid per second. 120g of evaporation will occur within a minute. Thus, the efficiency of heat removal during boiling is very high and makes it possible to omit radiator plates. For two-phase cooling, Novec 7000, 7100 and 7200 are commonly used.

During evaporation, Novec transitions from a liquid to a gaseous state. That is why the process is called two-phase. If the holding capacity is left open, it will require constant refilling due to liquid evaporation. If the capacity is closed, steam rises to the lid, where a condenser (several pipes or a coil) with a coolant is installed (even cold water is acceptable). The same principle as with common heat exchanger. The gas condenses and returns back into the tank as stream of drops. It does not require any pumps and constant liquid refilling. This is how one closed working circuit is formed.

Of course, the liquid in the condenser is also heated. And the heating power is proportional to the power emitted by the video cards needed to boil the liquid. Therefore, liquid cooling is constantly required. For this, a second closed loop is formed. The water that runs through the pipes enters the air heat exchanger with a fan, which is taken out outside. It removes heat so the water is again suitable for cooling the primary circuit. 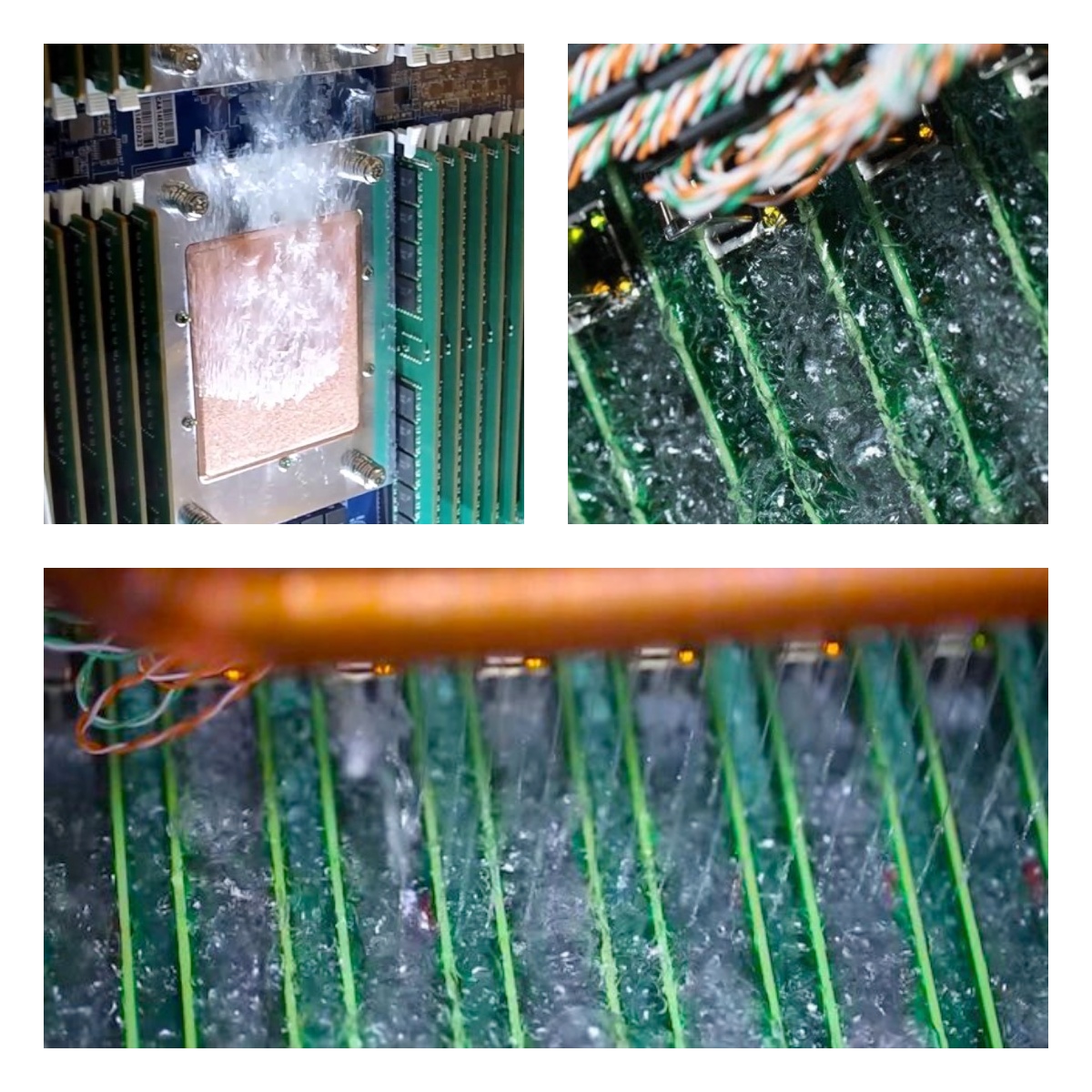 For a two-phase system, a dielectric liquid with a low boiling point is intentionally used. This is done so that the boiling point of the liquid does not exceed the working temperature of the elements, and the heat exchange occurs more intensively. In this case, for example, copper plates are often installed on video cards while heat-conducting pads and thermal paste is removed. Then, the copper plate is installed according to the thickness of the gap. The copper’s thermal conductivity is one of the highest among other elements. That being said, the equipment refinement before its immersion occurs in the two phase cooling as well.

The advantages of a two-phase cooling system based on Novec:

Disadvantages of a two-phase cooling system based on Novec:

The transition from a liquid to a gaseous state is absent in a single phase cooling system. The liquid is circulated by the help of a pump and after being cooled in the heat exchanger it returns to the tank. For single phase systems, liquids with a high boiling point are usually chosen (120–130 degrees Celsius, as in Novec 7500), but at the same time it should correlate with the operating range of the immersed equipment.

There are also several technical nuances here that are related to the volatility achieved at high temperatures and heat transfer. Novec 7300 and 7500 are used mostly used in single phase cooling systems. 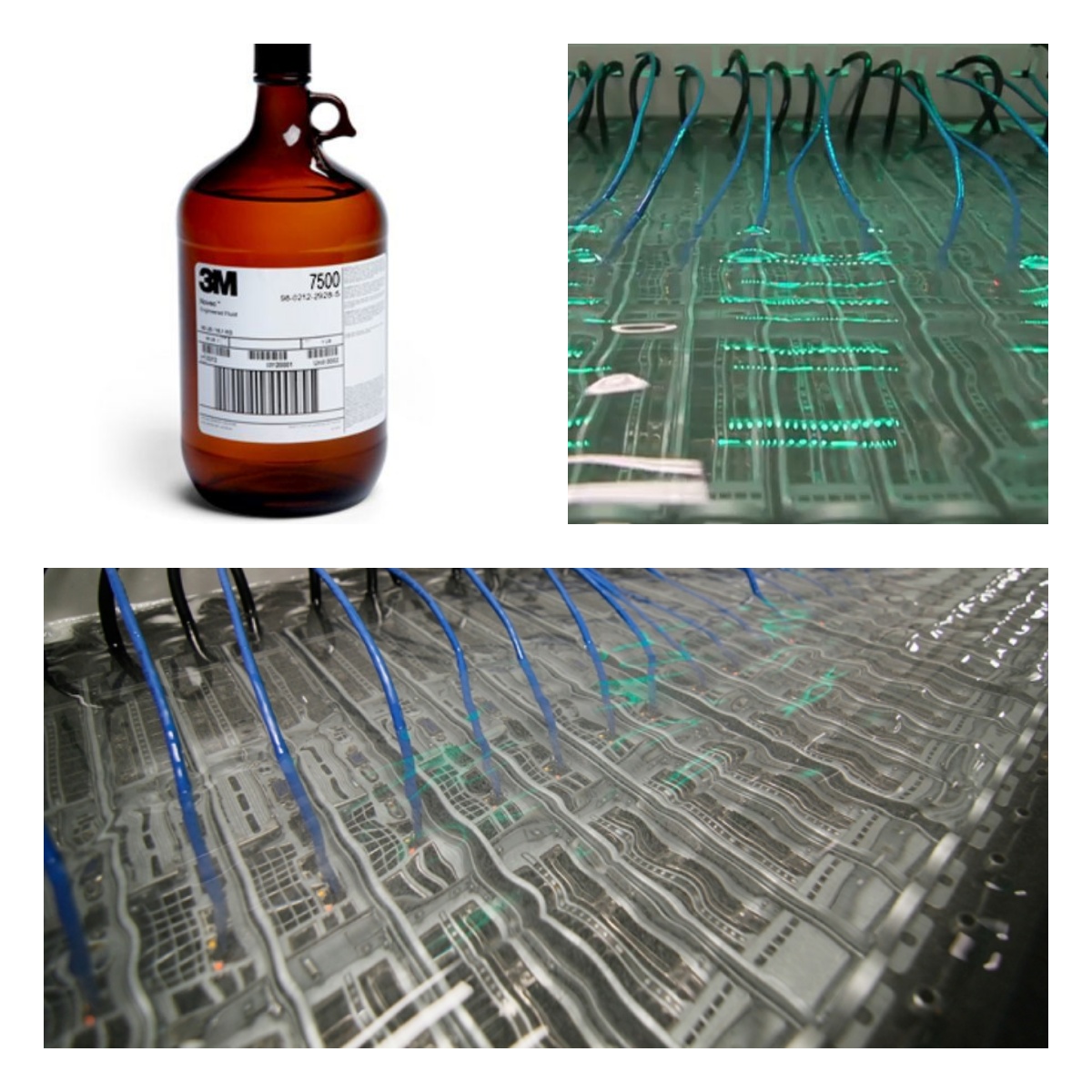 It is easier to control the pressure in systems without a phase transition and there are no need to worry about liquid expansion during its evaporation. These processes’ compensation is cheaper and just easier.

The advantages of a single phase system based on Novec:

Disadvantages of a single phase system based on Novec:

During the development of the installation based on immersion cooling, BiXBiT experimented with different liquid compositions, including Novec. Mineral oils were used as the basis and with the use of additives, BiXBiT ended up with their own coolant composition, which successfully proved itself while working with mining equipment (GPU, ASIC, FPGA).

The fact is that immersion cooling implies equipment to be fully immersed into the liquid. As a result, coolant provided higher combination of thermophysical properties.

BiXBiT Coolant is a non-polymerized dielectric. One of the main advantages of the cooling system based on Coolant is that it is suits both home miners and large projects without affecting the scalability. Equipment cooling occurs evenly, since the thermal conductivity of a liquid is higher than of air. This ensures thermal stability inside the cells. We also select the best pumps and heat exchangers, based on the characteristics of the equipment involved. Coolant is odourless, non-toxic, safe for people and animals, traces of which are easily removed from surfaces. Second-hand equipment undergoes minimal processing  before the immersion - dedusting and air cooling system dismantling. 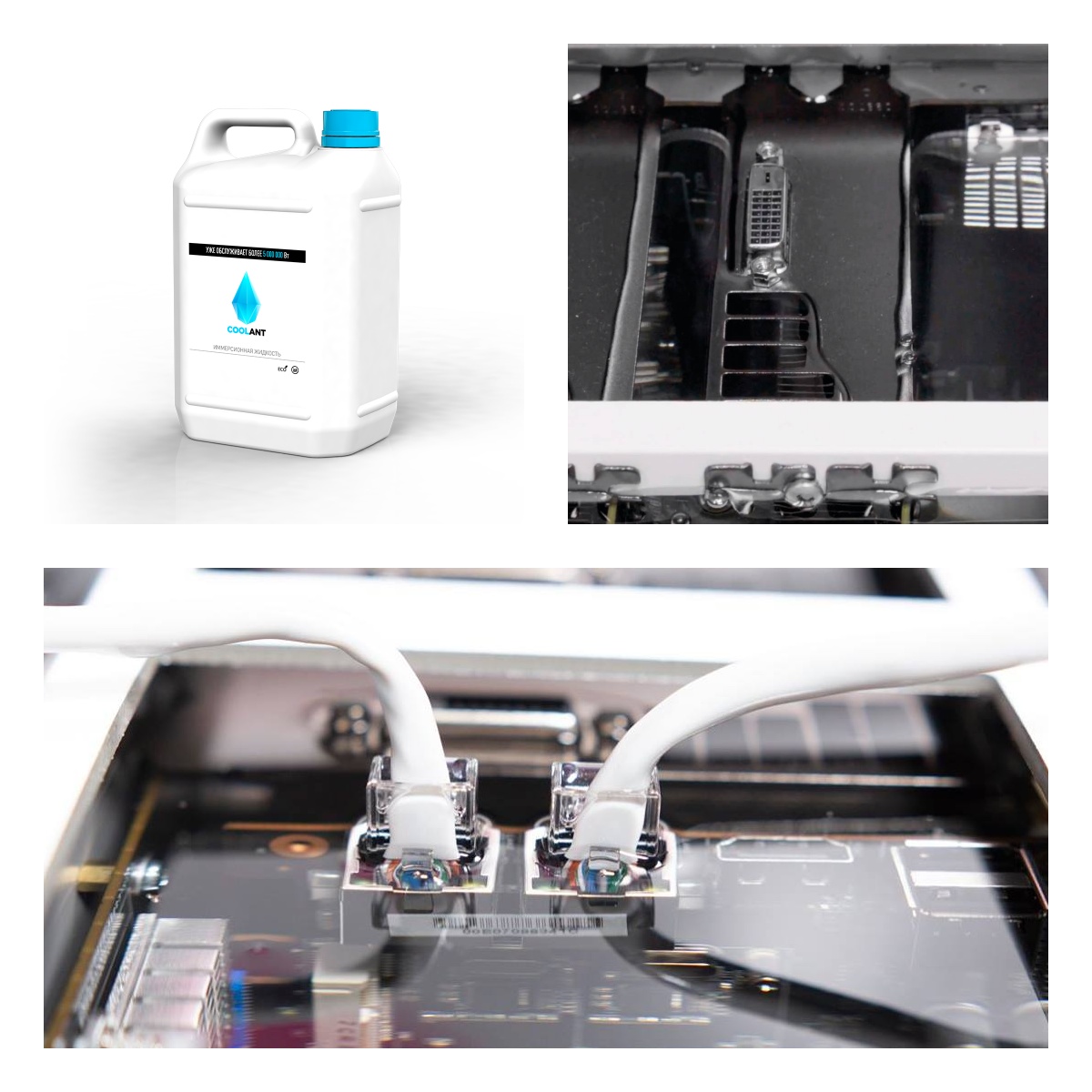 Coolant can be stored and used in partially sealed containers. It practically does not evaporate under similar conditions; therefore, in a single-phase cooling system, the tightness of a container is not critical. Its characteristics are confirmed by laboratory tests.

Fire safety is very important. Yes, under certain conditions (after reaching the ignition temperature of the entire coolant volume, which is much higher than the flash point of 225 degrees Celsius), the coolant burning is possible. The first is the ignition of a mixture of steam and air, a flash of vapor-air mixture, but not the entire volume of coolant (which is about 60-80 liters). In our case, the Coolant flash point is 2 times higher than operating temperature of chips of the immersed devices. Before this happens, either the ASIC, GPU, FPGA protection system or the installation automatic protection system will shut everything down. So there are no conditions for spark to occur as by that time the equipment will be turned off for a while. In addition, our cells and rack’s frame are made of steel, which increases the level of fire safety.

In the context of smart heat utilization, a single phase system based on Coolant is also more efficient than a two phase system. Since the output temperatures are higher, it is easier to heat (reheat) the water. In the two phase system it is more difficult to implement smart heat utilization and there are also many nuances. The BiXBiT installation implemented the most simple and convenient solution designed to minimize breakdowns and failure of individual elements. The company's specialists can implement any solution, including those based on Novec (3M), but its price will increase in proportion to the resources spent. Nothing is impossible, the question is in the product final costs, its maintainability and affordability for miners of any scale.

Let’s compare the characteristics of Coolant with the main Novec liquids:

The main advantage of our Coolant is the price. Below is the cost of Novec 7100, Novec 7500 and Coolant liquids. Volume of 20 liters, the currency is in Russian rubles. Note that the density of Novec is higher and it is required more liters of liquid (1.6 times) rather than one-to-one in kg (as it is sold by suppliers):

Comments are needless. With comparable characteristics, our development is almost 50 times cheaper than the 3M liquid, which determined its choice. Of course, every solution has the right to exist, but with current stagnation in the cryptocurrency market, everyone thinks of how to save their money. It is safe to say that our company has found the solution, allowing to maintain an optimal price-quality ratio.

MINING TECHNOLOGIES IMMERSIONCOOLING Longread
Latest news
1
New Year’s Miracle: A Solo Miner Received a Reward of 6.25 BTC BITCOIN
2
BiXBiT and the UN Sustainable Development Goals: How We Make the World a Better Place BiXBiT
3
The AMD BC-160 Mining Video Card Is Available for Purchase on AliExpress GPU
4
Mining in Oil Fields - The Future of Cryptocurrency Mining? BiXBiT
5
Insiders Revealed the Specs of the New Intel GPU TECHNOLOGIES
Related materials:
1
Best ASICs for mining in 2018-2019: advantages and disadvantages ASIC
2
"Killers" of the mining equipment - getting rid of noise and dust IMMERSIONCOOLING
3
Small secret of big mining: inexpensive FPGA for getting out of the crisis MINING
4
FPGA for mining: what trends will prevail in 2019 MINING
5
Which ASIC to buy in 2019: new models vs old ones on immersion cooling MINING
Telegram channel @bixbit_new Subscribe to our feed